How the Dow Crash has Impacted Franchising

FRANdata developed and uses the FRANdex  to see how franchising is performing against other indexes like the Dow Jones. With the recent crash of the Dow, we take a look at the impact it’s had on franchising. 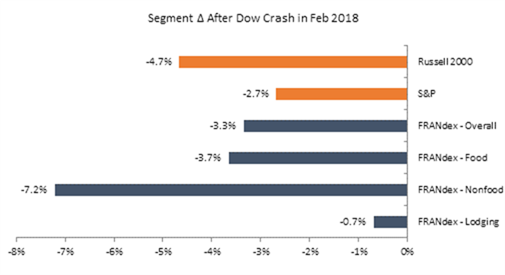 The falling stock market crash had a significant impact on companies in the FRANdex:

Lodging brands showed most resilience against the falling stock markets:

« Getting Your Brand In Front of The Right Lenders
Welcome to FRANalyst Friday: Observations on the Pulse of Franchising »